Have I mentioned that it’s exhausting when you’re in the hustle? I’ve been exhausted for many years, long before the real hustle began and I want to take this opportunity to go back in time to 2008, where the new “me” was born. I had just met Hannah, who is now my wife and the mother of the most amazingly handsome little Judah, our son.

I moved from my small little town in South Georgia to Athens, Georgia on July 5, 2008 with $62 in my wallet and an oversized duffel bag with all the clothes I owned. At the time, I wasn’t “moving,” but simply take a few days to get out of town and see a new place with my beautiful new girlfriend! The day before, I had gotten a tattoo of a rose on my left forearm that signifies a new beginning. I’m always looking for an excuse to get a tattoo, and there was a little bit of that mixed in on this particular day, but it was really a new beginning and I was prepared to be as bold and fearless as I’ve ever been. 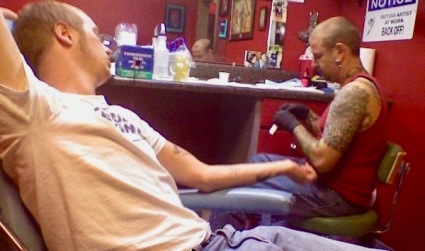 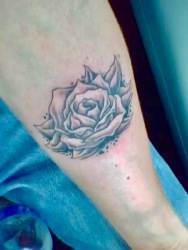 There is a lot more background to our love story that is not really fitting today, but I will say that having someone wholeheartedly in your corner is the most critical thing any entrepreneur can hope to have. After just a few days of being in Athens, Hannah and I talked about the possibility of my staying on a more permanent basis. It all sounded great and with that, it was just a matter of figuring out a living situation. Before I could get an apartment, I needed a job. Before I came to Athens, I had been working for a family friend who managed a small-town subsidiary to a big grocery chain and, as it turned out, a former employee of his happened to currently be the store manager of the parent chain location in Athens. With just a phone call, I had been issued a job transfer.

These days, it’s so complicated to get things done if you’re not really sure what it is you’re really trying to do. This is to say that my point from an earlier post was that it is important to have goals and to be crystal clear on how you plan to achieve them. It’s one thing to fly by the seat of your pants and luck your way into a job transfer, and then to go apartment complex hopping to find someone who will rent an apartment to a 22-year-old with no real credit and no cash or credible job history. In hindsight, I know that I shouldn’t have relied so heavily on the people around me to help get me through some difficult obstacles. Had I just slowed down enough to think things through and set some goals, make a plan, and stick to it, the outcome may have been quite a bit less tumultuous.

I started at the grocery store in August of 2008 as a bagger and stock clerk. I believe the word was and still is “miserable,” to say the least, and that is how I felt going to work the few days a week that I did there. Apparently, my attitude was a little too obvious and I eventually found myself being called back to the Manager’s office one afternoon, where I was let go just a few short months in. Just in front of the grocery store was a Blockbuster video rental store, and I took it upon myself to walk across the parking lot and ask for the manager. Within a week, I was back at work in a new environment and just trying to make things happen.

Retail jobs have always been a love/hate thing for me, where I mostly hate it and love very few things about it. Retail will soon become my whole world for the most part for the coming years leading up to some very interesting experiences later in my twenties. I can’t wait to share them with you!

What was your best and/or worst job growing up?